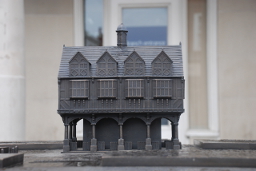 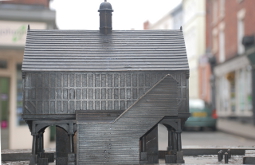 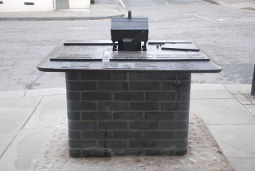 Architect, built Grange House (formerly the Market Hall), Leominster (1633); Market House, Brecnoc (1624) & Market House, Kington (1634). He is associated with the buildings in Weobley, Abbey Dore, Tyberton, Stretford, Orleton, Pembridge, Ross-on-Wye, Ledbury and Hereford, although there is a lack of evidence to prove this.

Known as the King’s Carpenter and constructed corn mills in Hereford for the besieged citizens in the Civil War.

This craggy stone a covering is for an Architector’s bed,
That lofty buildings raised high, yet now lyes low his head;
His line and rule, so death concludes, are locked up in store;
Build they who list or they who wist, for he can build no more,
His house of clay could hold him no longer,
May heaven’s joy frame him a stronger.

On 1st March 2011, the Mayor of Leominster, Cllr. Roger Hunt, Martin Baines (Vice-Chair of the Leominster Regeneration Company) and Denise Collier (and her assistance dog, Honey) unveiled a bronze model of the Leominster Market Hall that had stood on this spot.

The Market Hall was built in 1633 by John Abel. It was erected on the site of the old, decaying Market House, also called Butter Cross or Crosse House, from which the head of the martyr Roger Cadwallader was displayed after his execution in 1610. The site was called “Five Ways”, being the junction of Broad, High, Burgess and Church Streets and Draper’s Lane.

The site of the Market Hall was always a hindrance to traffic and in 1793, it needed considerable repairs and thus it was proposed to demolish the building and re-erect it elsewhere. This was opposed by the town council (and probably more importantly, the plan was opposed by the Duke of Norfolk, premier duke in the peerage of England) and the building repaired. The traffic problem became worse as more wheeled vehicles came onto the road and in 1852 it was finally agreed to remove the building. It was pulled down and sold to a builder for £95. John Arkwright M.P. of Hampton Court bought the Market Hall off the builder for the same sum and offered it to the town for re-erection. Some citizens, Messrs. Francis Davis, Josiah Newman, Edwin Lloyd and Francis John Edwards offered to fund its re-building in Corn Square. However, a local solicitor, T. Davies objected to their plan, which was abandoned. Eventually, in 1855 Arkwright rebuilt the hall in its present site on the east side of The Grange.

The Grange House was a private dwelling until 1939 when it appeared that a group of Americans were about to purchase it and transport it to the USA. A Preservation Order was invoked and eventually the Corporation bought the building and it became the offices of the Borough Council.

The Grade 2* listed building has undergone extensive restoration by the Leominster Area Regeneration Company, a not-for-profit organisation. It is now open to the public, details on their website.

The model was commissioned by the Leominster Area Regeneration Company with financial contributions from Advantage West Midlands, Barclays Bank PLC, the Leominster Civic Society, Marches Housing Association, N&M Baines - Architects and Bill Jackson. The project was managed by the Dog Rose Trust of Ludlow in conjunction with Omega Models of Glasgow and Castle Fine Arts Foundry of Oswestry. It is cast in bronze and the text is both in raised script and braille.